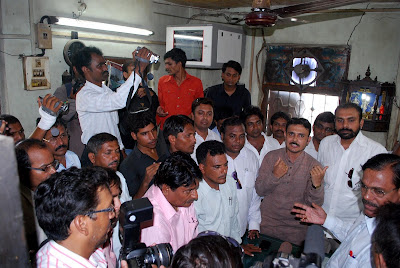 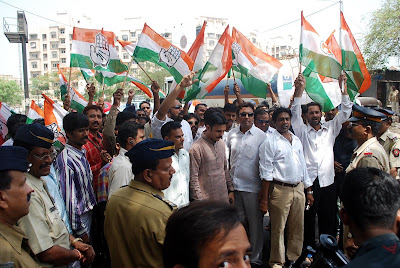 Flays the Shiv Sena, BJP Ruled MCGM for Failure of Administration and Placing at Risk

In the wake of the sting operation conducted by Television News Channel in which MCGM officials and MCGM Police Personals were caught red handed on camera accepting bribes in return of passing off their loaded vehicles without checking, the Youth Congress took a serious cognizance of the incident and Protested against the corruption and failure of the MCGM administration, on 11th May 2009, at Mulund East Octroi Checknaka, Mulund East Eastern Express Highway. Hundreds of Youth Congress Workers demonstrated at the Mulund east Check Post, shouting slogans against the Shiv Sena BJP governed MCGM and against its corrupt octroi officials. When Youth Congress Workers confronted the octroi officials, the officials expressed their ignorance to the incident which was telecasted all over Mumbai and further mentioned that the MCGM infrastructure was incapacitated to thoroughly check each and every vehicle passing through the Check post.

Sayad Ayub, President of District Youth Congress strongly criticized the Shiv Sena, BJP ruled MCGM by saying " The MCGM is ruled by the Shiv Sena ,BJP alliance and if their administration is at failure at these sensitive Check Posts, how can they claim to administer the country if they come to power at centre?, He further said that "A memorandum in the same concern will be submitted to the Chief Minister of Maharashtra demanding inquiry into the incident and also demand formation of more Government Flying Squads to oversee the governance of these Octroi Check posts".

While explaining on related aspects for the demonstration, Rajesh Ingle, office bearer of District Youth Congress said that, "In return of bribes the MCGM officials may unknowingly let a terrorist outfit or anti social organization ferry ammunition into the city limits with ease resulting in more terror attacks within the city. Furthermore, the state government ends up losing revenue amounting to crores of rupees due to evasion of octroi duty as proper cost of goods within vehicles is not analyzed at check nakas since they are left without inspection in-return of small bribes".