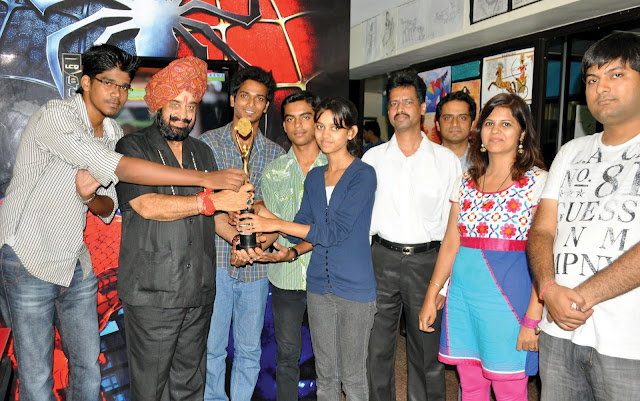 Mulund, 21st May: Students of Arena Animation, a pioneer in animation & multimedia education won the first prize for their documentary film based on the need for cleanliness in Mumbai city at the Bhumika Film Festival, held in February 2012 under the aegis of Jhunjhunwala College of Mass Communication in Vashi.
Under the guidance of Mrs. Kushal Kambli, Arena students from the Mulund center, who are currently pursuing B.Sc in animation at the center - Sandeep Maoury, Vignesh Mhatre, Sayli Garud, Amol Jadhav, Raj Doshi, Vinayak Gholap, Rahul Kumkar, Kark D Phena participated in the film festival and made a documentary film. Arena Animation organized a function to praised their victory on 21st May, 2012 where Mulund MLA Sardar Tarasingh felicitated winners with trophy and certificate. Shivsena Ward No. 99 precedent Rohidas Devade was  also present at this occasion.
The objective of the film was to convey how Mumbai is getting dirtier and that the civics issue of the city needs to be addressed with immediate effect. The film was made on actual location, using video camera.
There were students from three other animation institutes along with some BBA and BMM colleges who participated in the film festival.
Bhumika Film Festival stands as an encouraging platform for the young creative media students to showcase their talent and gain guidance from the experts in the industry. An initiative by the Mass Media students of India Culture League Education Society's (ICLES') Motilal Jhunjhunwala College, Bhumika has been an electrifying success at the amateur level platform. With the participation and response that Bhumika film festival has received it has become a big hit amongst its audience.
Elated with the accolade that Arena students won, the global head, Mr. Anuj Kacker said, "We are thrilled with the recognition our students got at the Bhumika Film Festival. With the increasing prominence of the festival itself, getting acknowledged on such a scale would do wonders for the future of our students in animation.”
at May 23, 2012 No comments: